Discover the origins of the Sonic franchise, all in one collection
With Sonic Origins!

In 1991, the popular character, Sonic, was introduced to the world.

Sega’s mascot, Sonic the Hedgehog (a.k.a. Sonic), was introduced to the world 31 years ago on the Mega Drive. Since then, there have been more than 70 games featuring the superSonic hedgehog. A live action Sonic movie made its way to theaters in 2020 and attracted immense popularity, and a sequel was produced shortly after.

Sonic Origins (released 6/23/2022) is a fantastic title for newcomers to the series, combining the original games into one package. 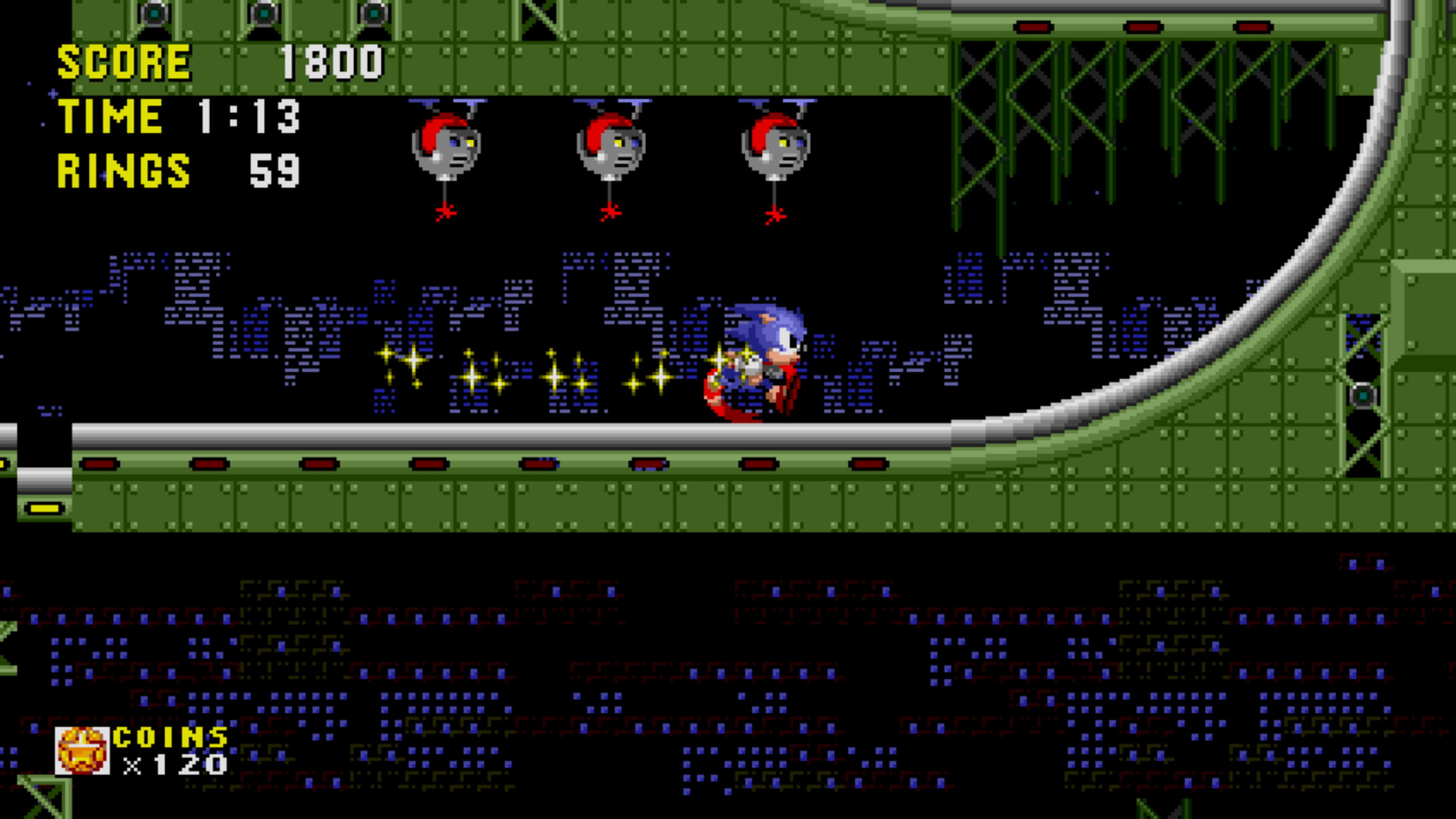 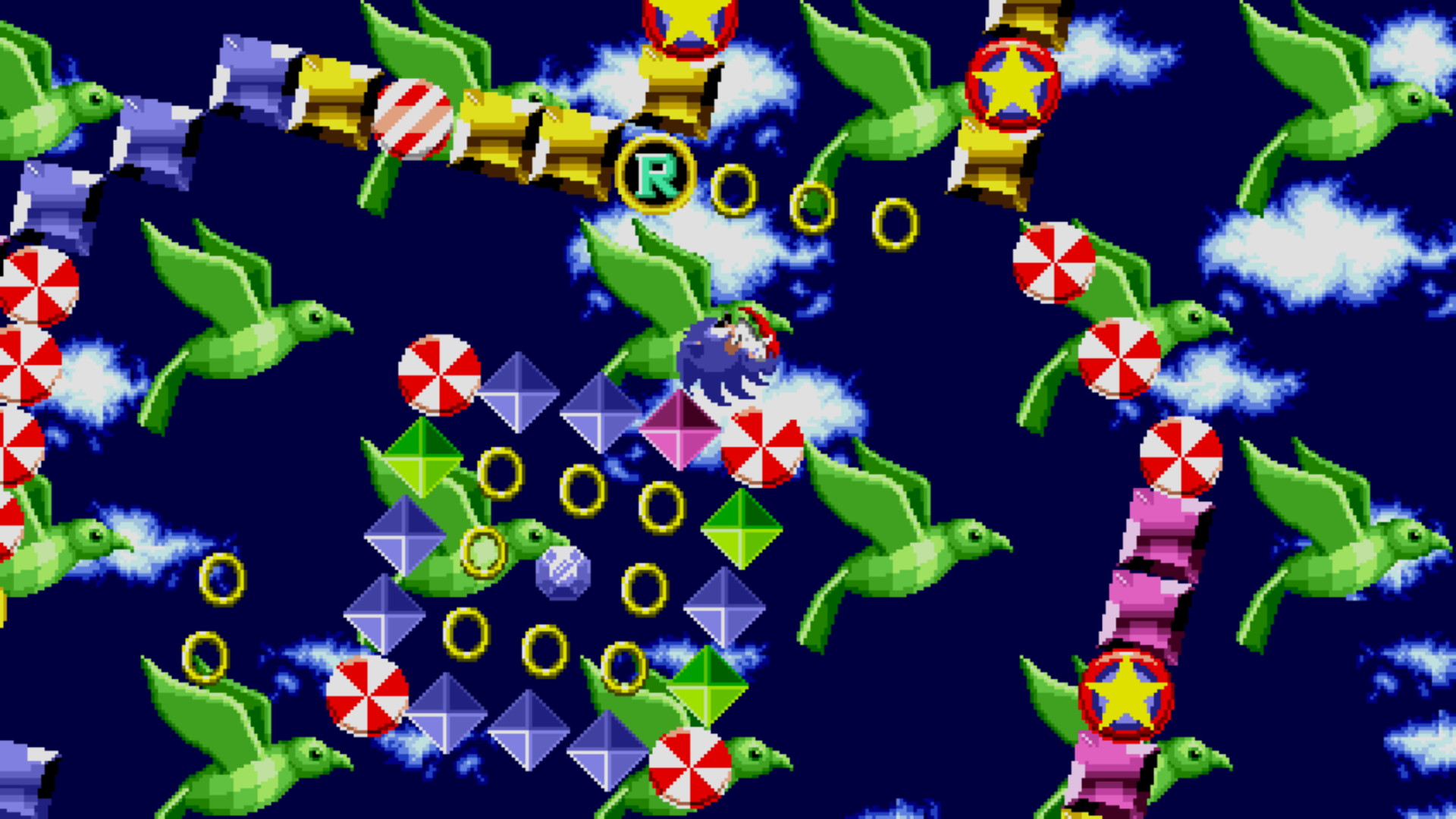 Sonic Origins features remastered versions of the four original games released on the Mega Drive and Mega CD, and it is available on all major platforms (Nintendo Switch, PS4/PS5, Xbox Series X|S, Xbox One, PC).

The side-scrolling action game that started Sonic’s high-speed adventures. Aim for the goal while collecting Rings and defeating enemies by jumping on them. If you have at least one Ring, you won’t get a game over when you take damage. All of the basic Sonic mechanics can be found in this title. 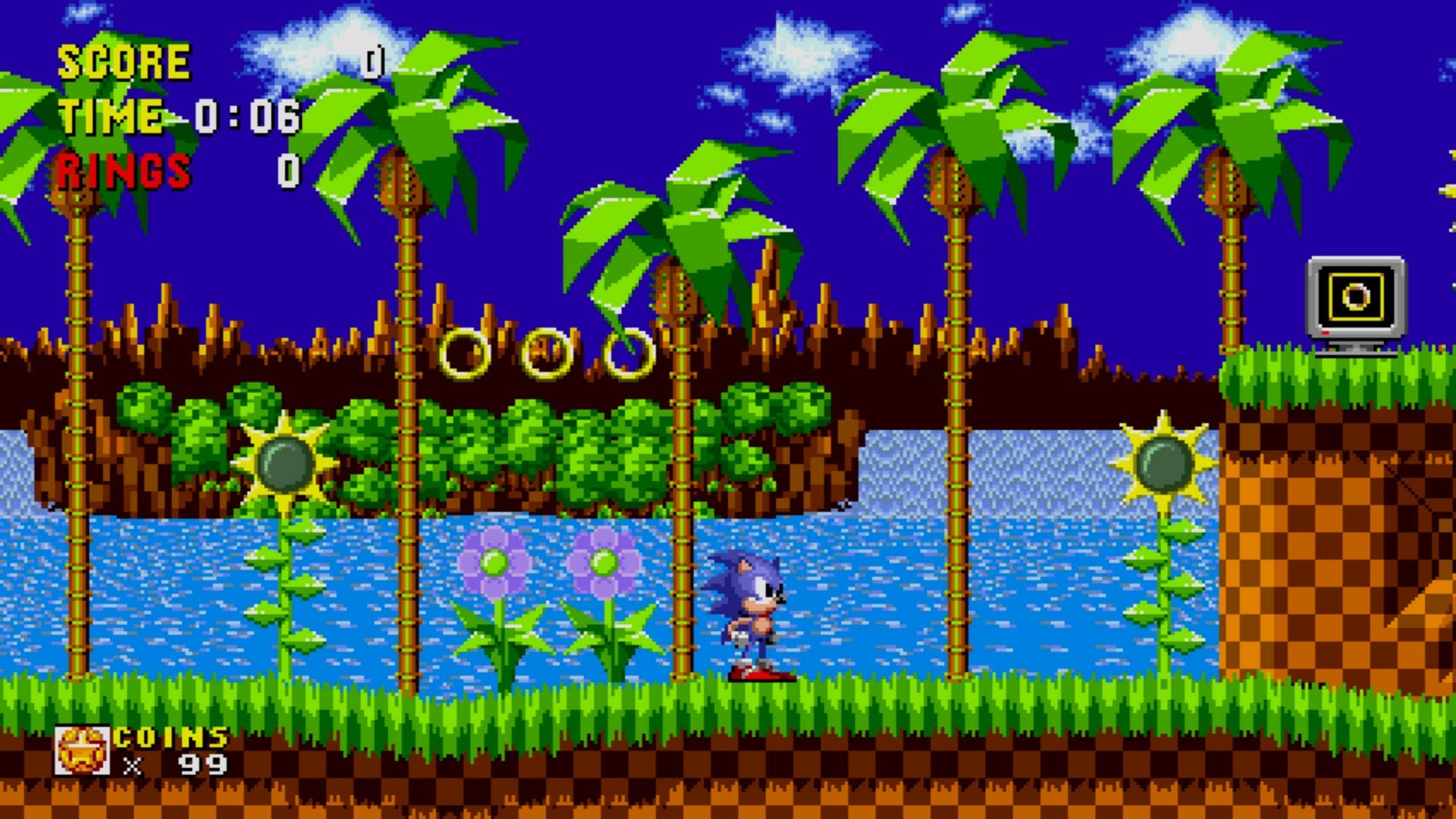 ▲The first stage of the first Sonic game

A sequel was produced in response to the enormous success of the first game. Sonic’s best friend, Tails, makes an appearance for the first time in the series. The addition of this cute companion allows for 2-player multiplayer, and even in the single-player mode, he tags along for the adventure. When playing co-op with a friend, Tails will never run out of Lives or lose Rings, so he’s great to use for newcomers to the series. 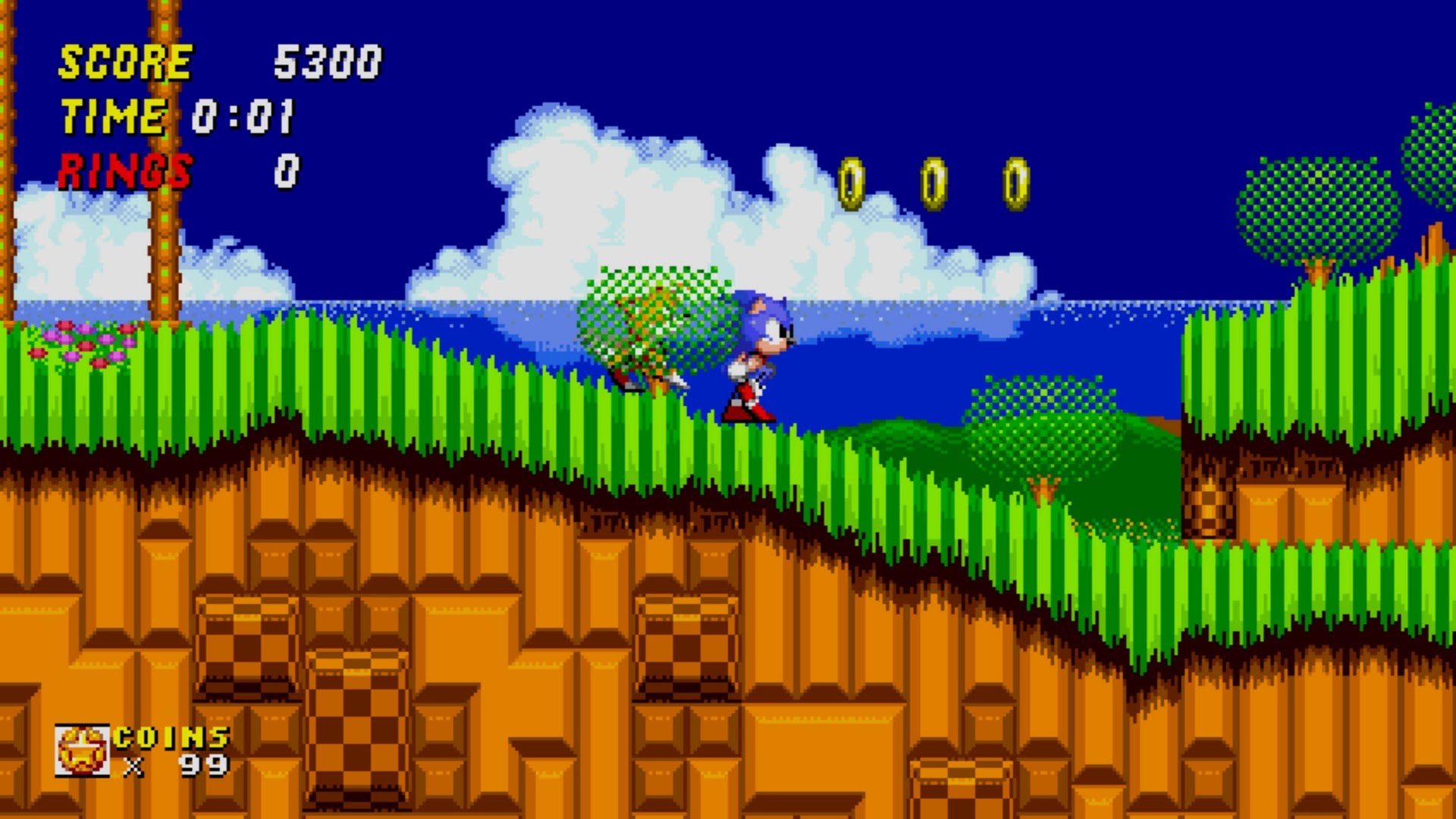 ▲Tails will follow Sonic from behind in single-player mode. With another controller, he can be operated by a second player.

A new Sonic title that utilized the improved technical capabilities of the Mega CD. The story takes place between the events of Sonic 1 and Sonic 2. A prominent feature of this game is its time travel mechanic. Players can travel through time by hitting signs labeled past or future, and Sonic will maintain his speed afterward. 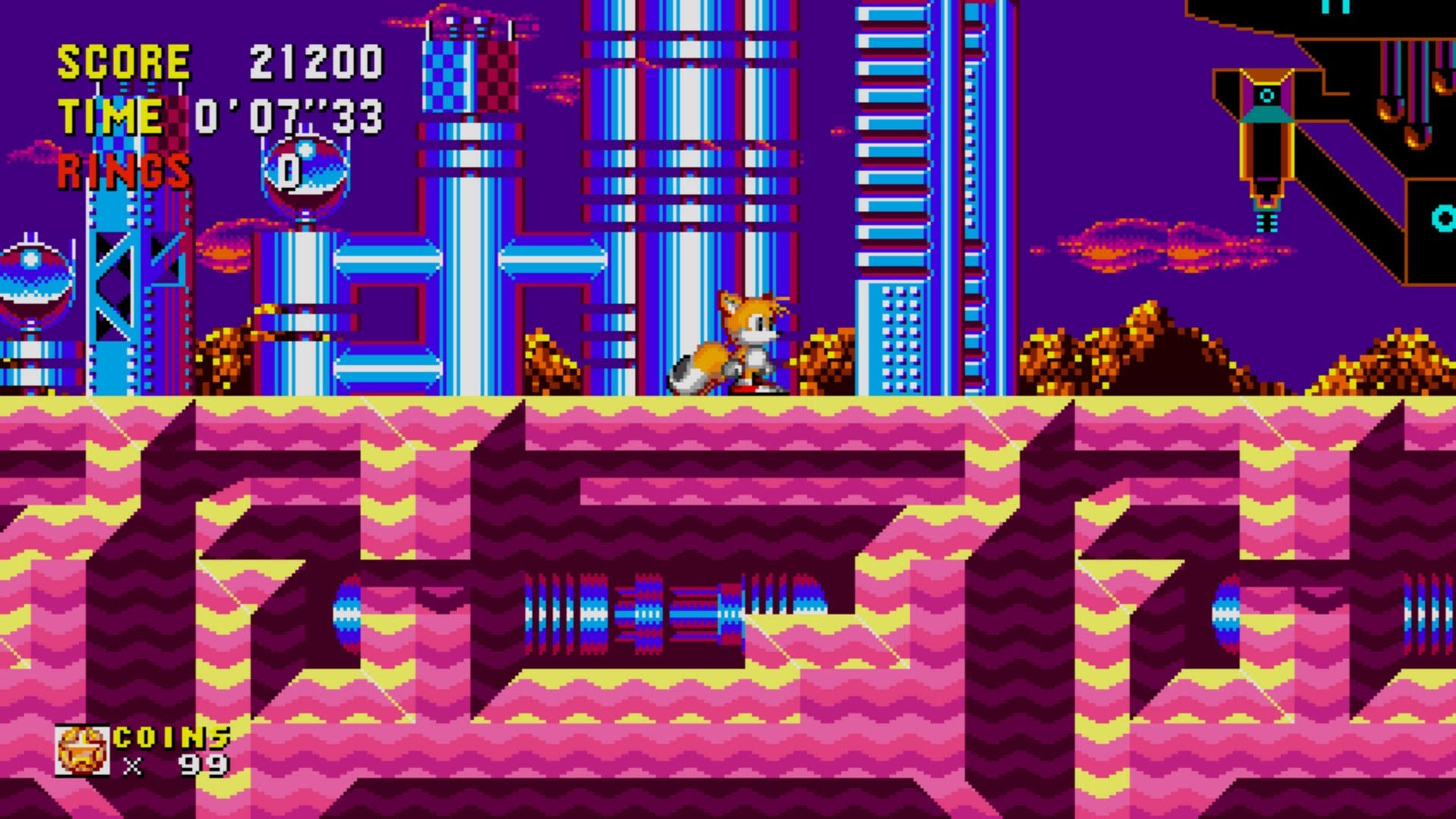 ▲The vibrant and colorful stages achievable on the Mega CD. In addition to the present, there are past and future versions of every level.

This title introduces Knuckles, a rival character to Sonic, as a playable character alongside Sonic and Tails. Knuckles can glide after jumping and climb most walls. Sonic can now attack while jumping by pressing the jump button again, and with certain shields, he can shoot himself at enemies like a bullet. Players can fly when playing as Tails for the first time in the series. By tapping the jump button the player can spin his tails like propellors to fly. 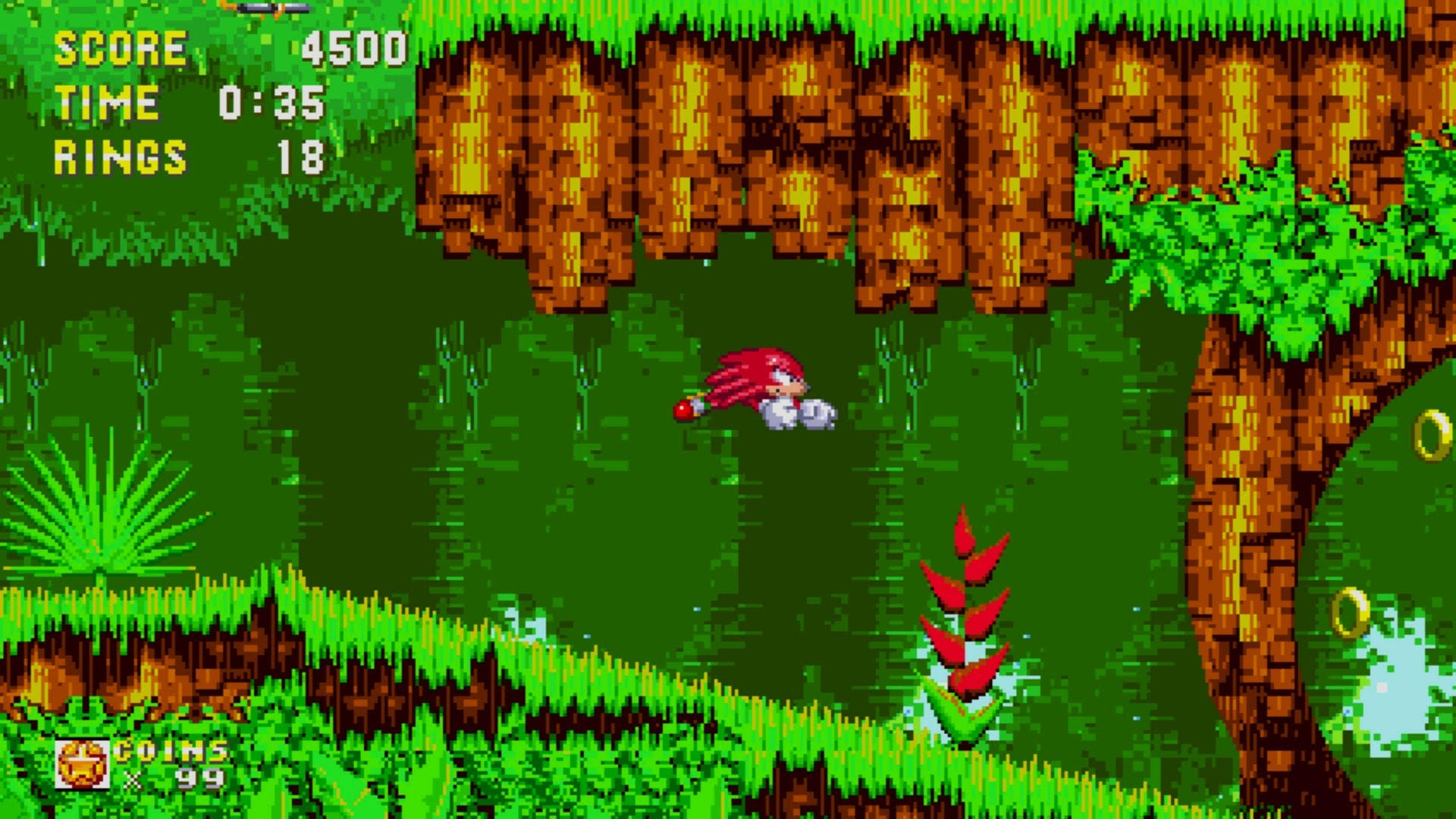 Another one of the highlights of SonicSonic Origins is the original animation. In Story Mode, the animated cutscenes will be played at the beginning and end of each title, connecting them all into one cohesive story. 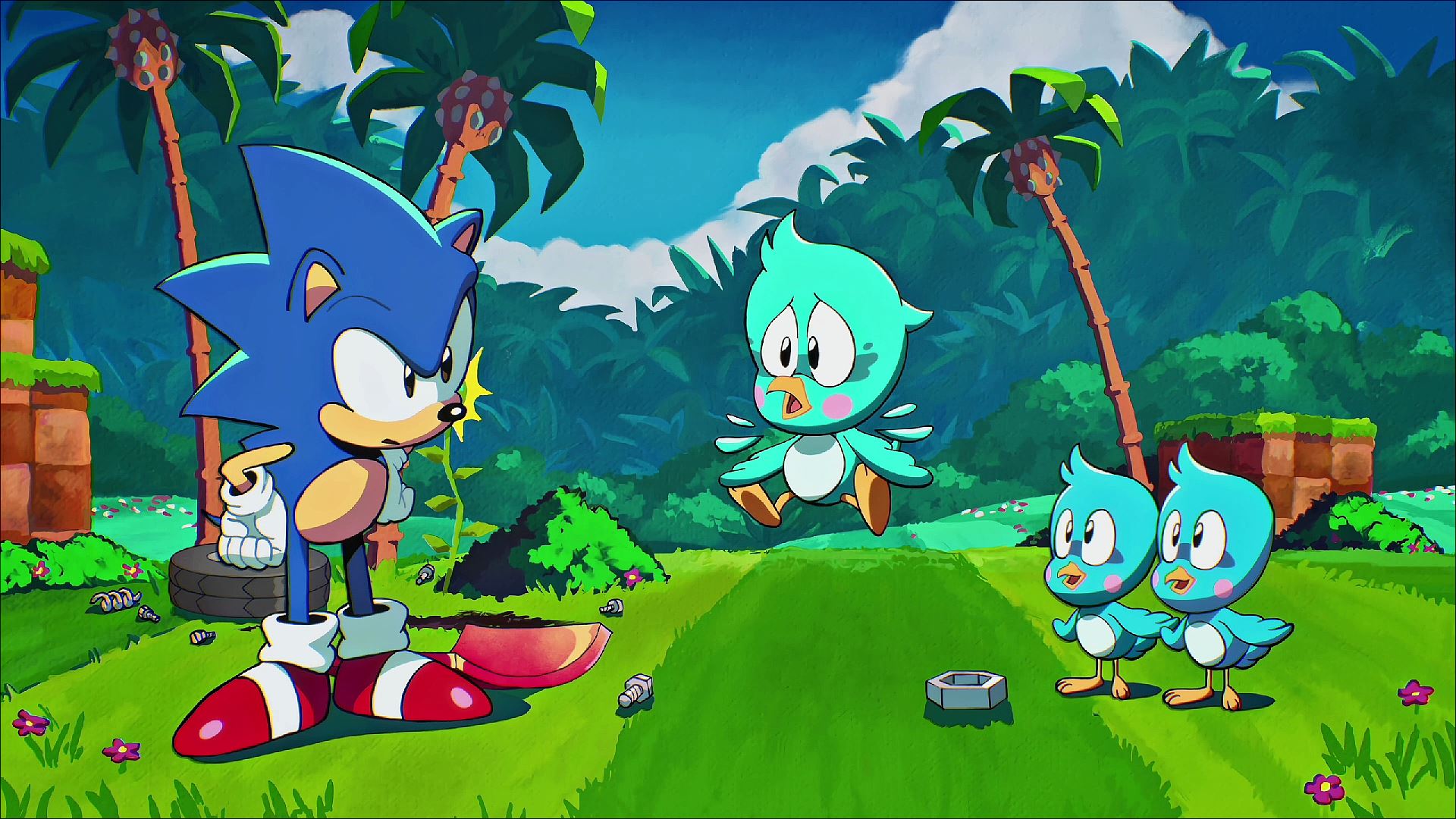 ▲The new animation created for this title.

The Sonic titles released on the Mega Drive are about 30 years old at this point, so they might be a bit more difficult than current action games. Anniversary Mode is great way for beginners to enjoy the games. Even if you make a mistake like falling down a hole, you will automatically recover. The time limits for the stages have been removed and continues are allowed in special stages. In this mode, anybody can reach the ending as long as they keep trying. For longtime fans of the series and those who are looking for a challenge, you can play the titles in their original state in Classic Mode. 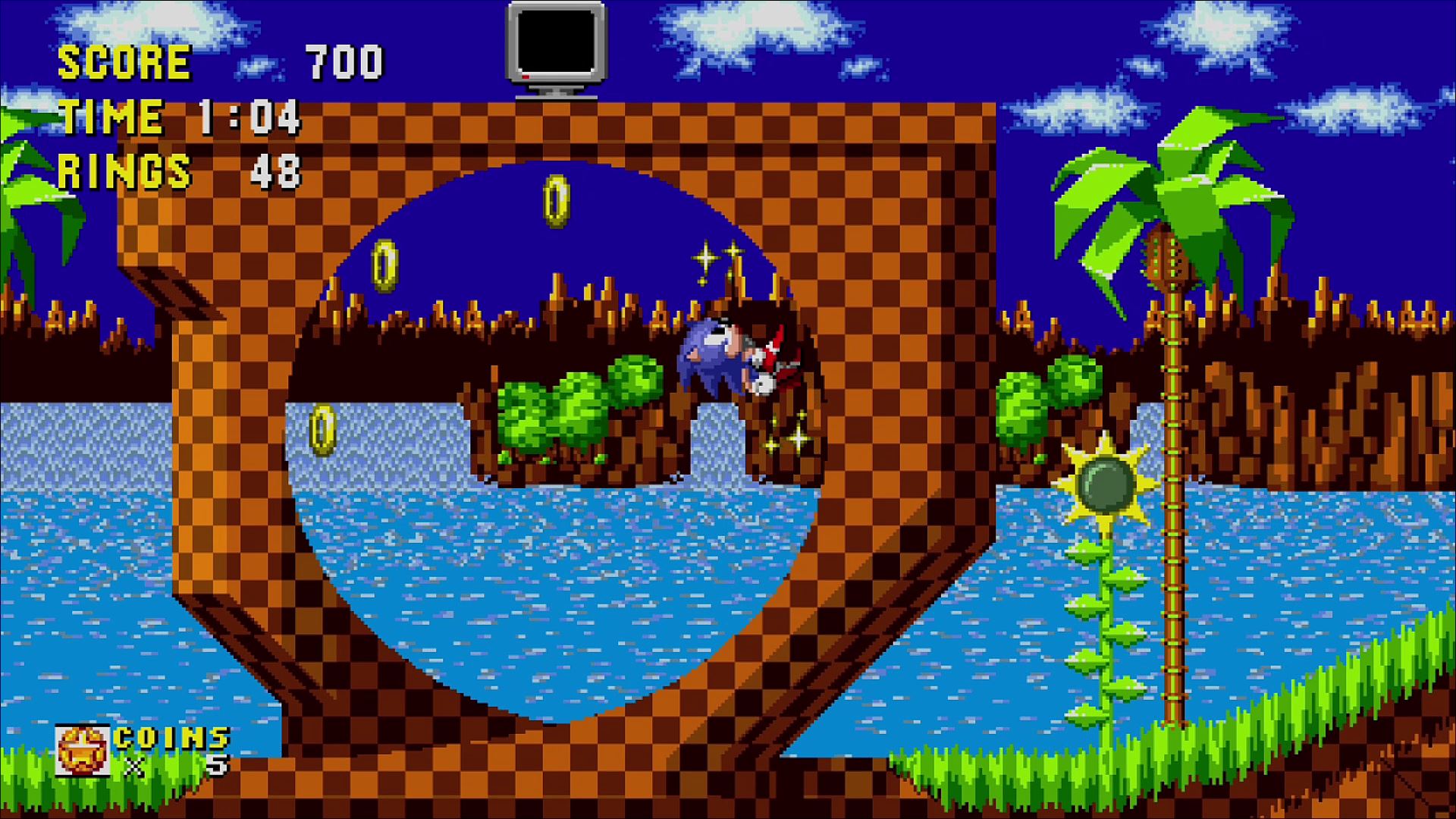 ▲The 16:9 aspect ratio in Anniversary Mode. You can restart from the latest checkpoint no matter how many times you fail. 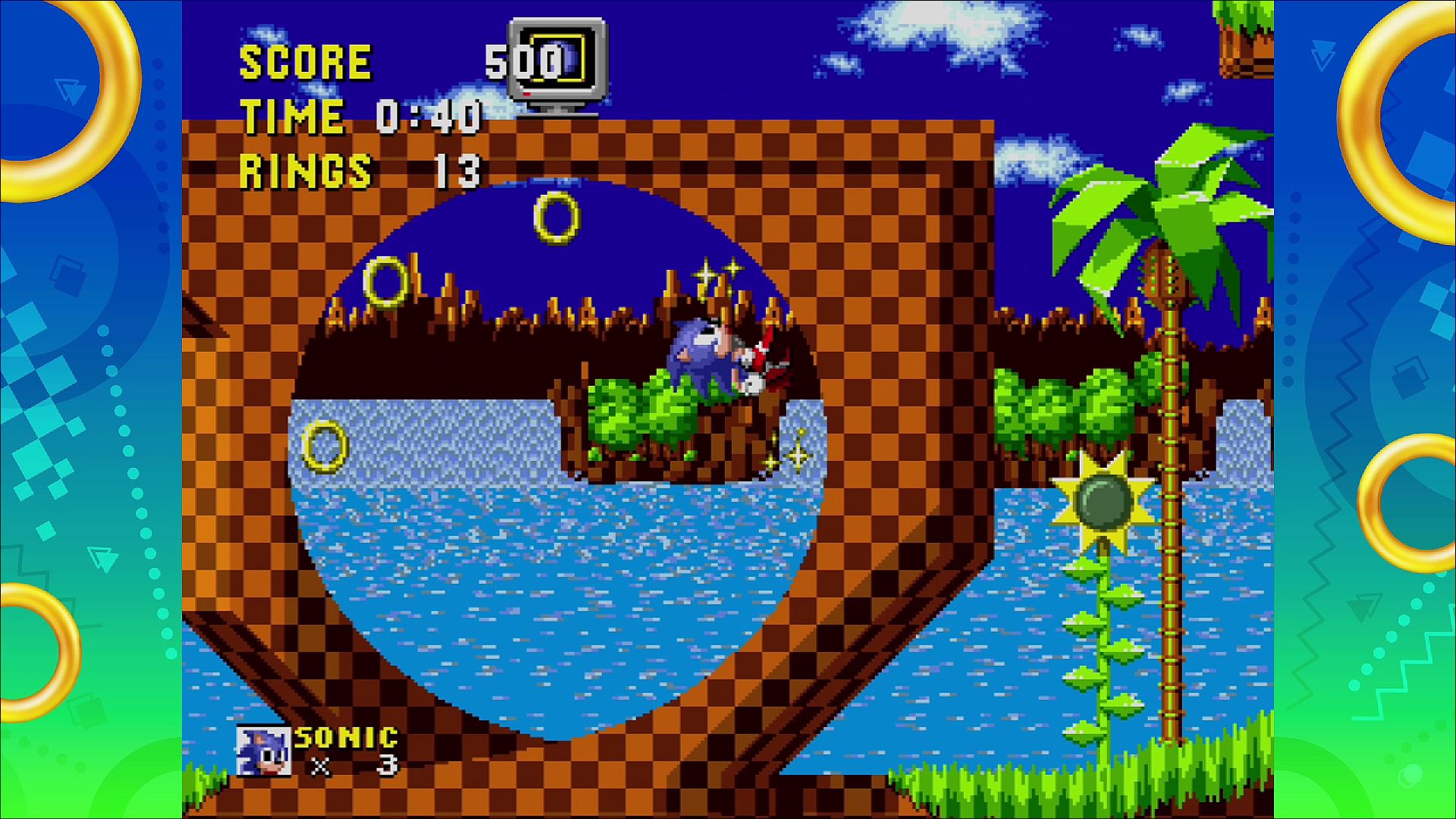 ▲The 4:3 aspect ratio in Classic Mode, same as the original Mega Drive versions.

This is the Origins of Sonic

Play the titles in chronological order or jump straight into your favorite title with Sonic Origins! We hope everybody plays the game which-ever way they want! 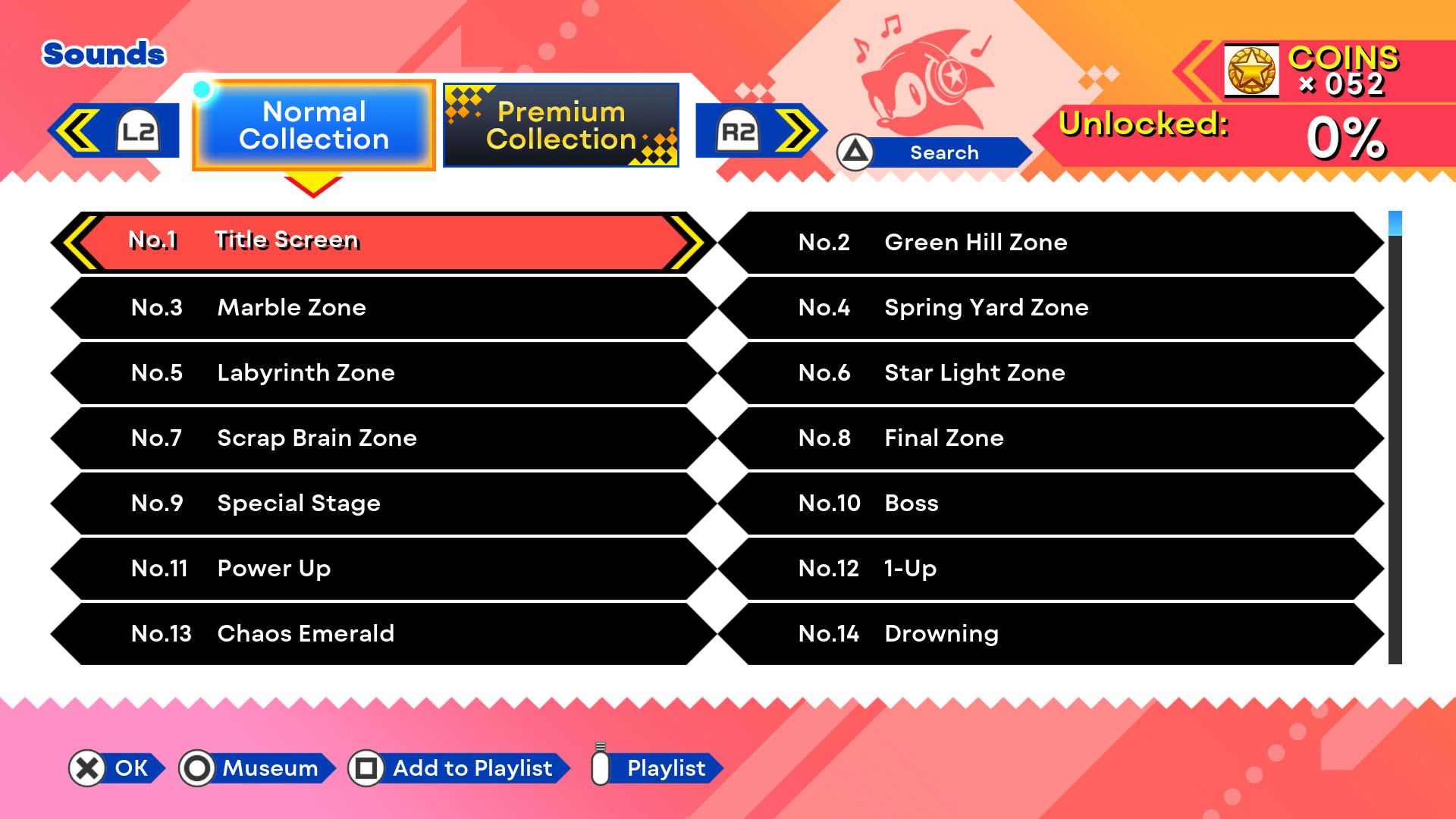 ▲In the Museum, you can enjoy Sounds, Illustrations, and Movies! Special content can be unlocked by spending Coins!

Interview with Katsuyuki Shigihara, The Director of Sonic Origins 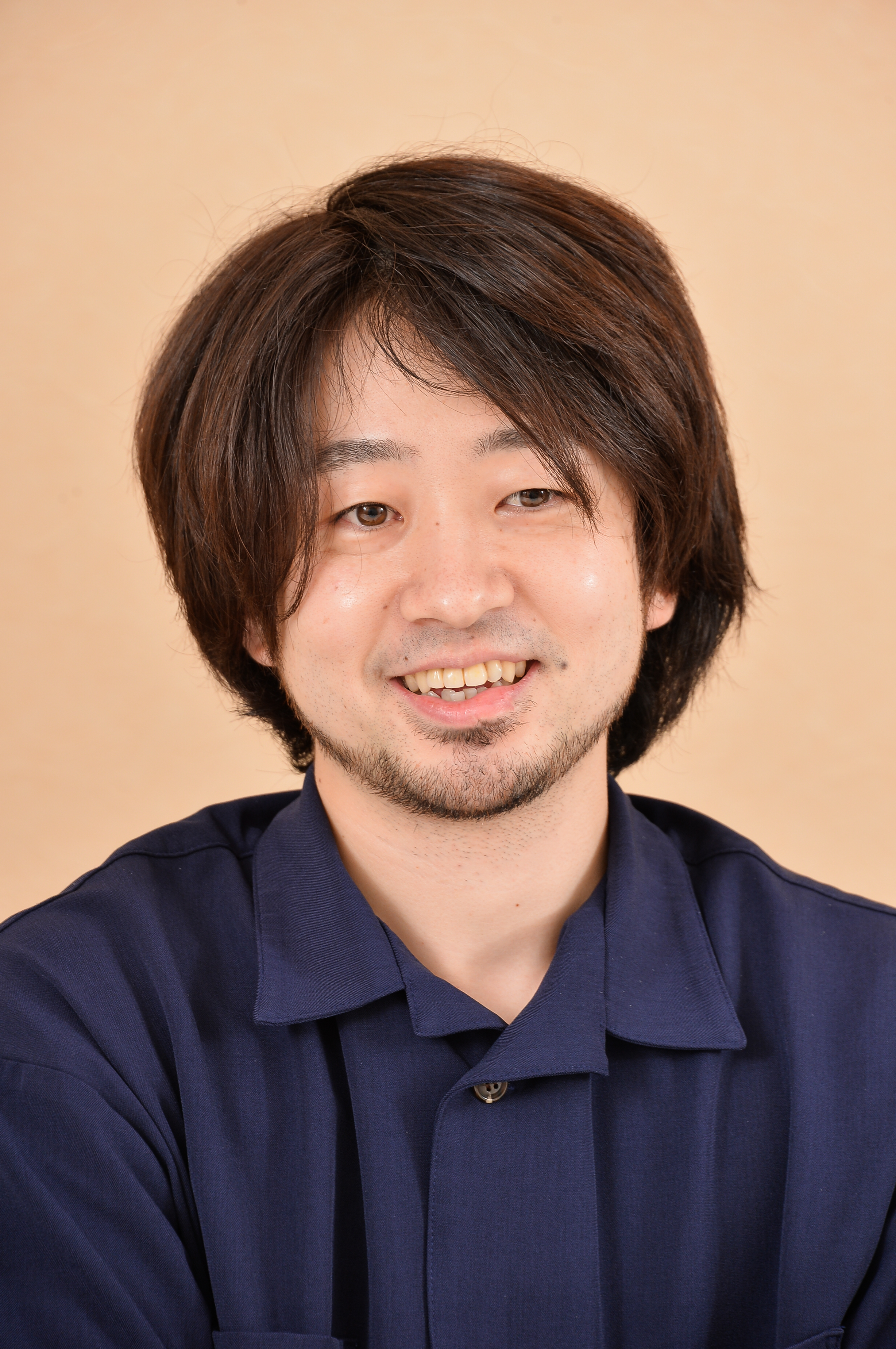 We asked Director Katsuyuki Shigihara how the idea for Sonic Origins was conceived, what the development process was like, and about hardships and highlights they experienced while creating the game.

–What made you decide to remake the origins of the Sonic franchise?

Shigihara: The Sonic the Hedgehog movie series was a big hit and seen by a wide audience. I wanted to give people an opportunity to play through the classics and get familiar with the story and gameplay of the original titles. I hope that many newcomers to the franchise will enjoy the games and continue playing Sonic in the future.

There were some difficulties during the development process. One example would be the islands in the Main Menu screen. If we used modern technology and made the islands look too realistic, it would ruin the retro aesthetic of the games. At the same time, however, we didn’t want to make the visuals look poor. It was very difficult to balance. 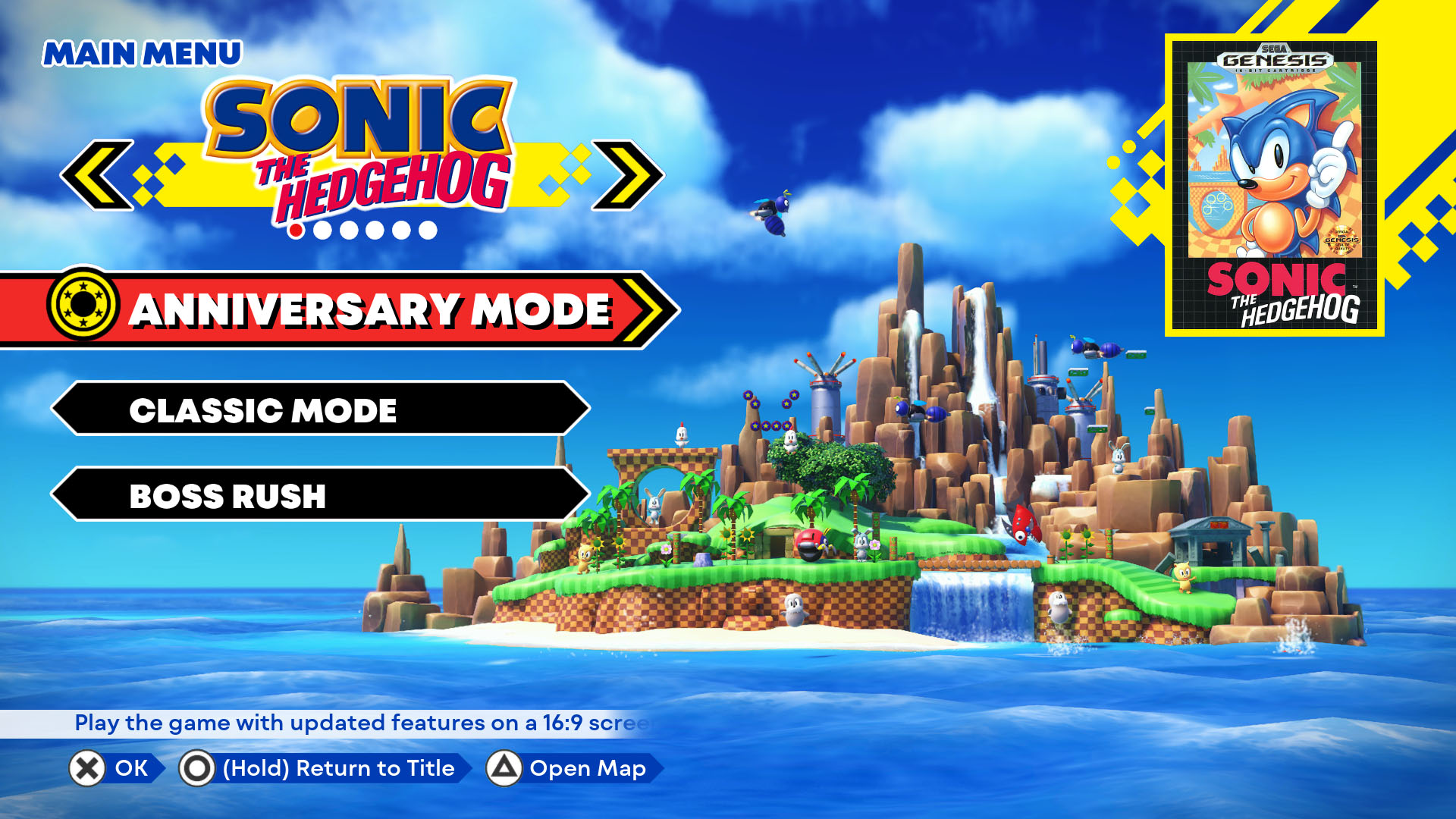 Also, digging up the valuable materials from Sega’s warehouse that we later added to the Museum was really fun. There’s a lot of content that is being released for the first time, so you should definitely check it out! 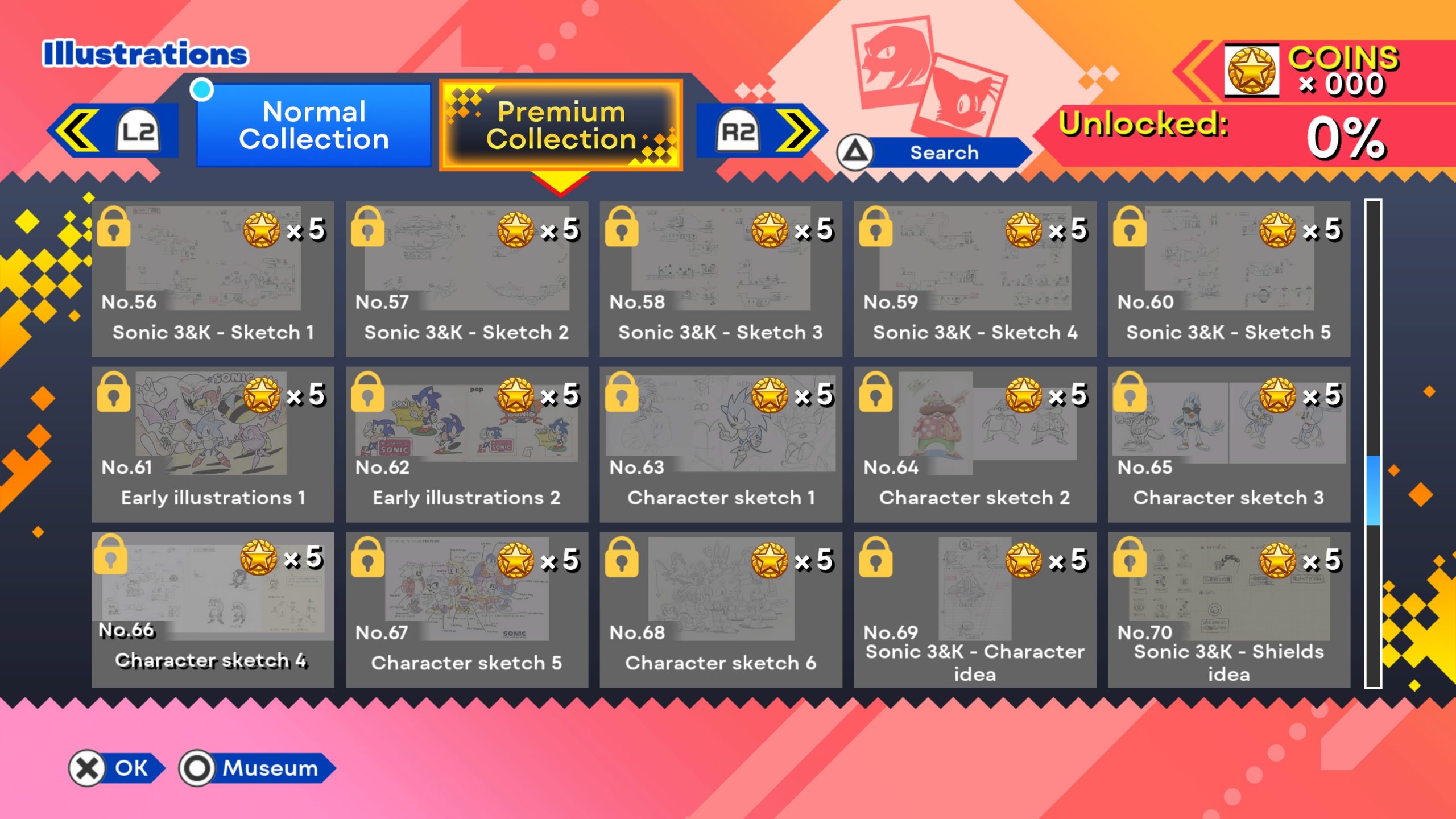 –The original Mega Drive game editions were developed on hardware that’s 30 years old, but they were able to implement high-speed scrolling, 360-degree loops, and spiral movement!

Shigihara: Given the limitations of the hardware, I think the techniques they created to implement their ideas are truly amazing. The development process must have been difficult, but you can tell that the developers really pushed the limits of the game. Given how much love the game still receives 30 years after its release, I think that all developers should follow that approach of challenging one’s limitations.

–The new animation for each title is a great addition to the game!

Shigihara: We used animation to express the story in a straightforward way without disrupting the feel of the original games. We hope everyone enjoys these special cutscenes! 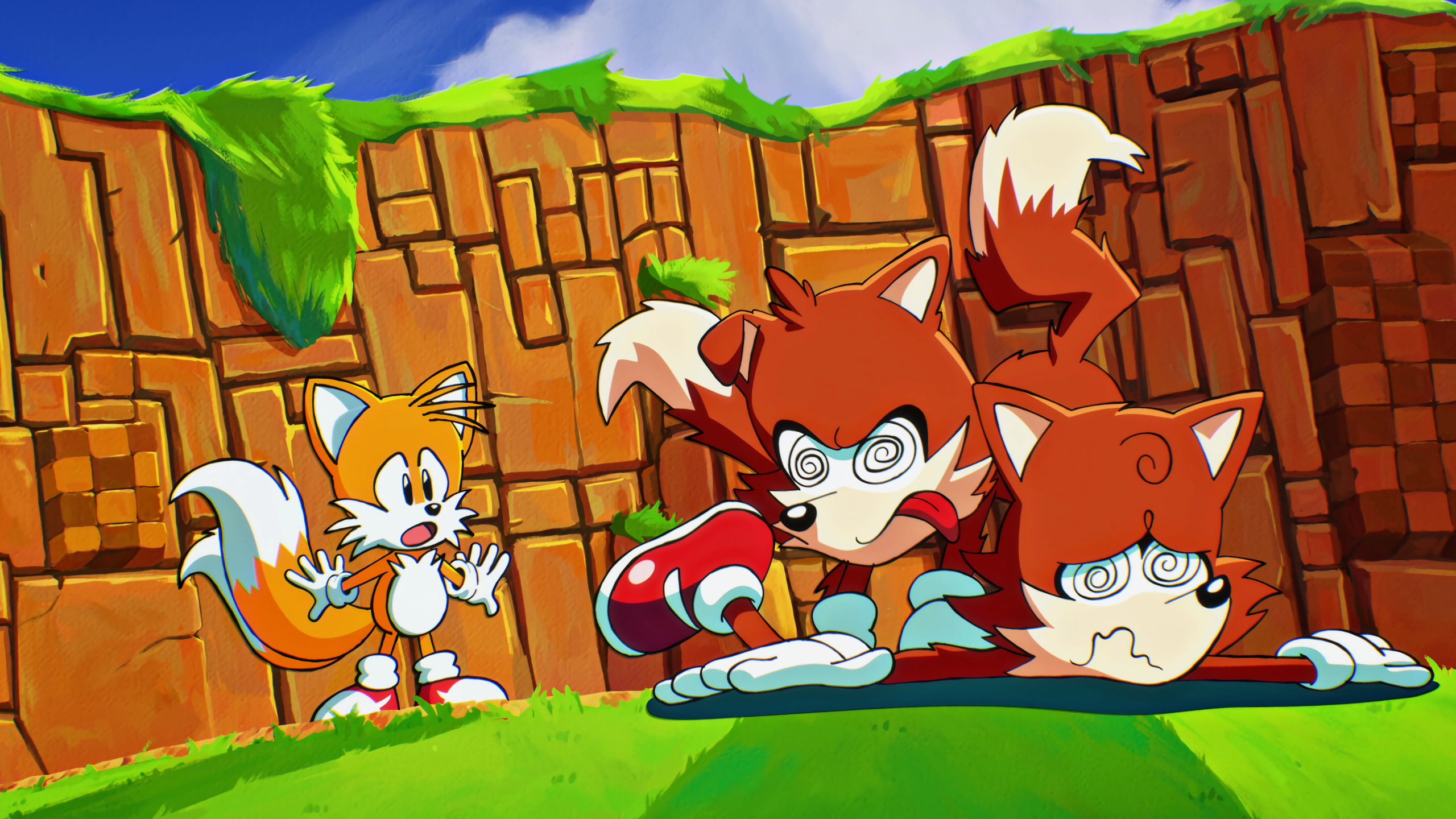 Also, the animation for Sonic CD has been remastered to 4K. So you can watch these 4K cutscenes on compatible platforms like PS5, Xbox Series X, Steam, and Epic Games. The animation will still be an upgraded Full HD on devices that don’t support 4K.

–Can you explain the chronological order of the Sonic titles? Does Sonic CD take place between Sonic 1 and Sonic 2?

Shigihara: The chronological order is Sonic the Hedgehog, Sonic CD, Sonic the Hedgehog 2, and then Sonic 3 & Knuckles. Story Mode connects all of these titles into one cohesive experience, so you can enjoy the story while playing through the games.

There’s also a manual from the development period that can be viewed in the Museum. The story is written on it, so I think it would be a neat thing to check out before you start playing! 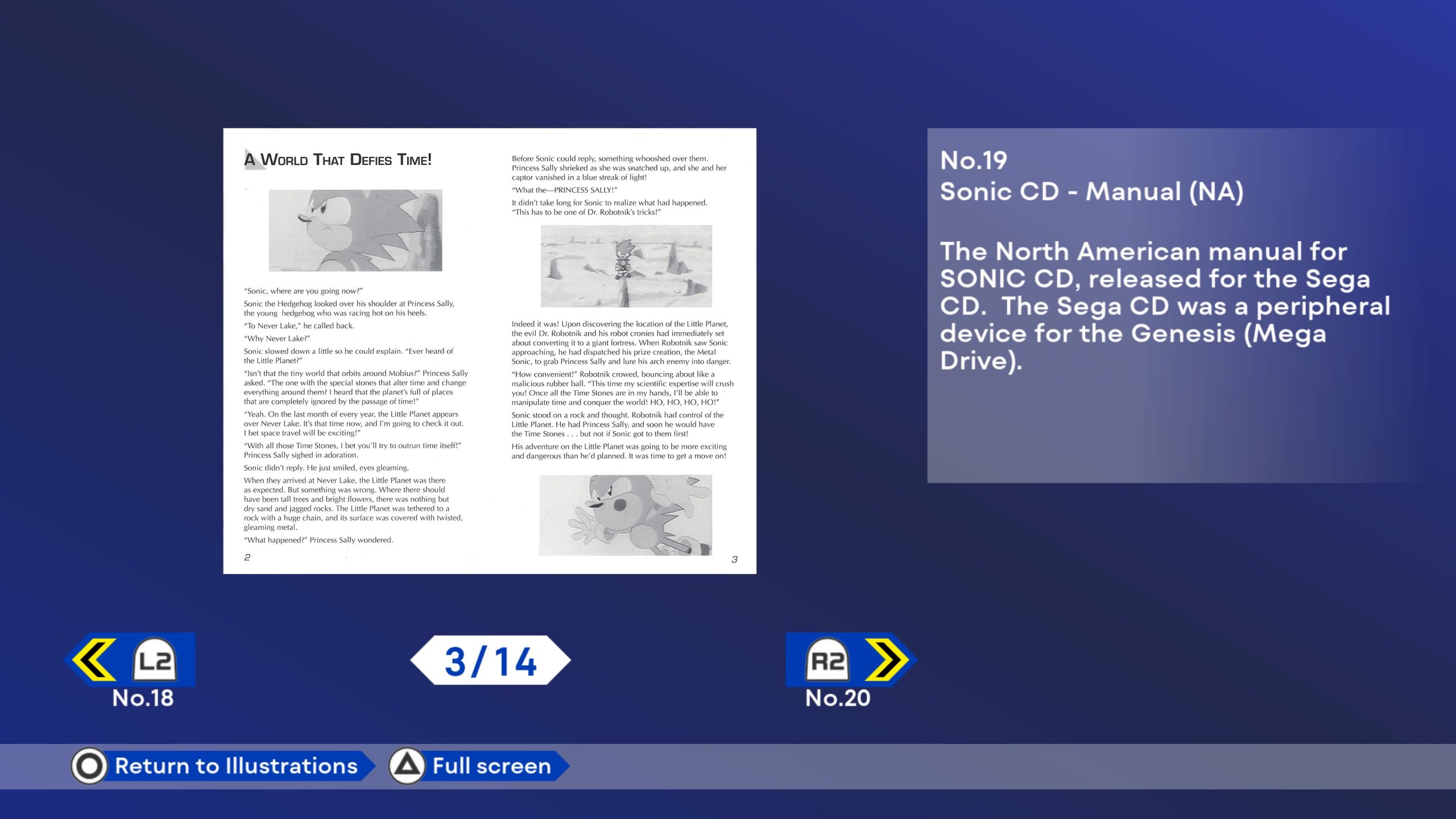 –What are the selling points of the paid DLC, the Premium Fun Pack and Classic Music Pack?

Shigihara: The Premium Fun Pack is content that enhances your overall enjoyment of Sonic Origins, and the primary focus of this DLC is characters. For example, more characters will show up on the islands in the Main Menu, and missions for each character have been created.

The Classic Music Pack is a collection of BGM tracks from the Mega Drive and Mega CD titles, which are somewhat difficult to obtain nowadays. All of these songs have been digitally remastered!

–For newcomers to 2D Sonic games, are there any parts that you would like them to pay attention to?

Shigihara: I would really like them to try out Anniversary Mode. The difficulty of the Sonic titles from 31 years ago remains the same, but with supportive features like having no game-overs, anybody can clear the stages as long as they keep trying. Once you get used to the game, you should definitely challenge yourself and try to get a top score in World Ranking!

–If you had to describe the charm of the Sonic franchise in one word, what would it be?

Shigihara: There are a lot of words that come to mind, but I think Sonic’s “coolness” is what I would go with. He’s a fantastic character that has been loved by many for decades, and he’s broken out of the sphere of game media into more conventional markets like animation and movies. As a result, more people have come to know and love the superSonic the hedgehog in recent years. 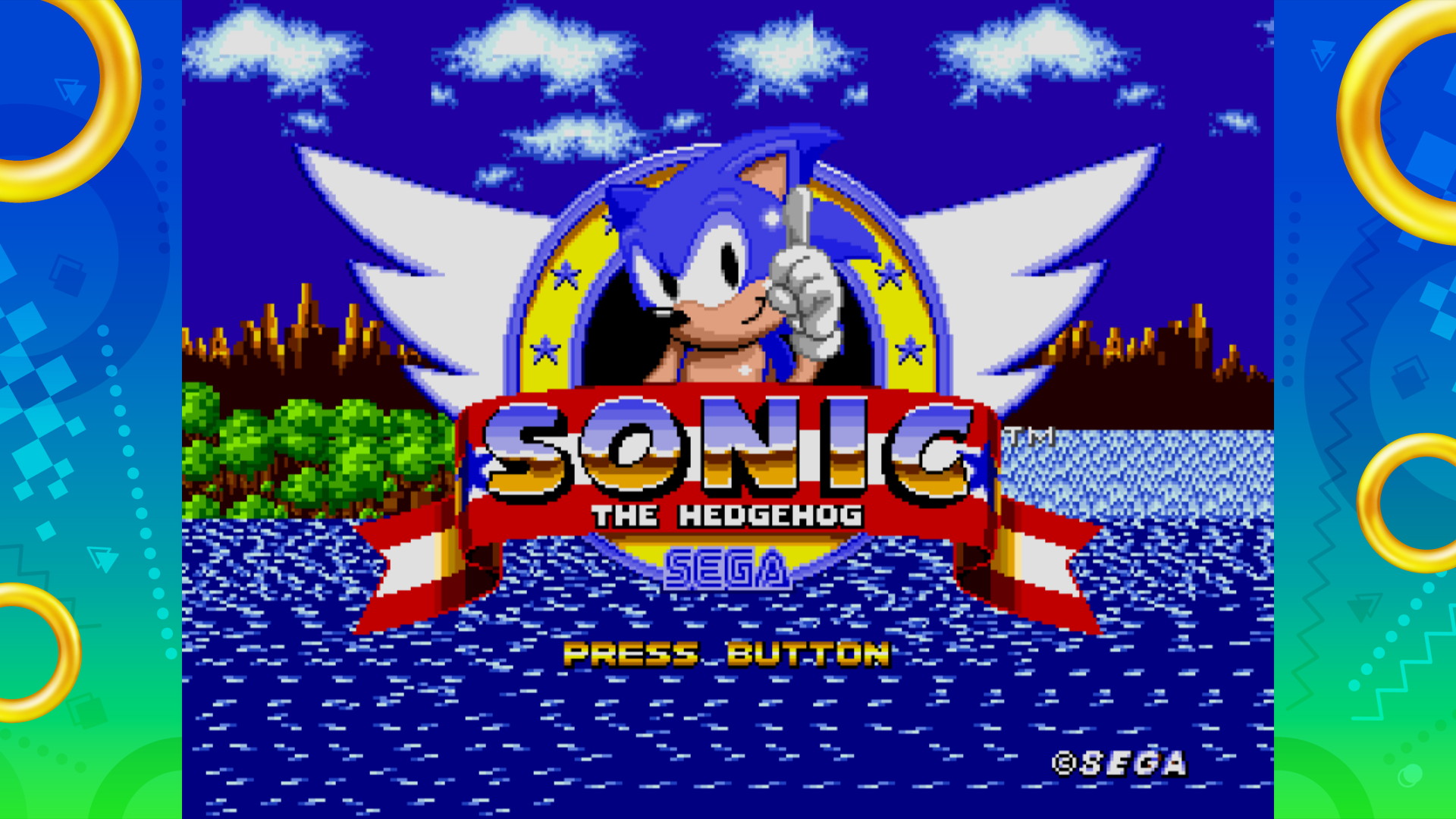 –To end things, do you have anything you would like to say to the fans?

Shigihara: There are a lot of words that come to mind, but I think Sonic’s “coolness” is what I would go with. He’s a fantastic character that has been loved by many for decades, and he’s broken out of the sphere of game media into more conventional markets like animation and movies. As a result, more people have come to know and love the superSonic the hedgehog in recent years.